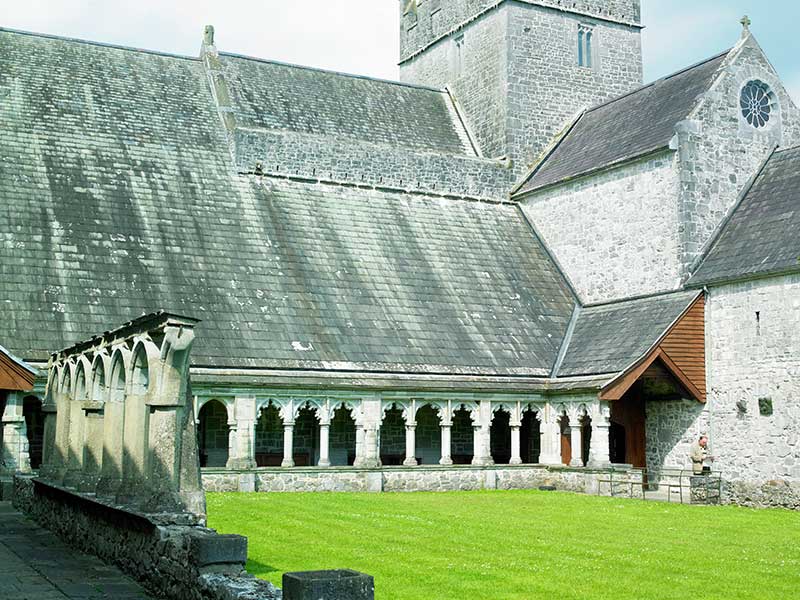 Located just 15km from The Rock of Cashel, Holycross Village is a tranquil and picturesque village straddling the River Suir in the middle of County Tipperary.

Holycross Abbey is one of Ireland’s national monuments.  As a popular pilgrim destination spanning eight centuries, it has a rich and fascinating past.  Pilgrims travelled there to venerate the abbey’s sacred relic of the true cross of Christ’s crucifixion, which gave its name to the Abbey and village.

Today this working Parish church is a peaceful landmark and a place for quiet contemplation and historical discovery.  Modern day visitors can see, close up, two relics of the true cross of Christ; they can marvel at the ornate stonework, described by experts as the ‘Highlight of Cistercian art in stone in Ireland’, or have fun sharing a secret the ‘Whispering Arch’.

The Rock of Cashel is one of Ireland’s most visited sites, and is a spectacular site displaying a collection of medieval ecclesiastical buildings set on an outcrop of limestone in the Golden Vale.  The 12th century Round Tower is the oldest surviving building on the Rock. The 13th century Gothic cathedral is a large cruciform Gothic church built between 1230 and 1270.  But the jewel in the crown of Rock of Cashel is undoubtedly Cormac’s Chapel. Cormac’s Chapel is one of the earliest and finest churches built in the Hiberno – Romanesque style.

The site also includes a 15th century Tower House and the Hall of the Vicars which is the entry point to the ecclesiastical enclosure.

The Rock of Cashel is located just 500 metres from the centre of Cashel Town.

An imposing 13th – 15th Century structure, Cahir Castle was skilfully designed by Conor O’ Brien to be a state – of – the – art defensive castle.  Appearing to grow from the actual rock on which it stands, the castle has been the scene of sieges and bombardments for centuries.

The powerful Anglo – Norman family, the Butlers, came into the possession of the castle in 1375.  The castle was captured three times in its history; it fell to Devereux, Earl of Essex, in 1599 after it had been battered for three days with artillery; it surrendered without a fight to Inchiquin in 1647; and again to Cromwell in 1650.

Over the centuries the Butlers rebuilt and extended their stronghold many times.  However, by 1599, the castle had reached its present appearance, with the only subsequent alterations taking place in the 1840s.

In 1961, the last Lord Cahir died and the castle reverted to the State.  The castle retains its impressive keep, tower and much of its original defensive structure.

Swiss Cottage, a delightful ornamental cottage, was built in the early 1800s by Richard Butler, first Earl of Glengall.  It remains and enduring local attraction in South Tipperary and an iconic image of Ireland.

Based on a design by the famous English Regency architect John Nash and inspired by nature, the cottage’s unusual and rustic features include a distinctive thatched roof while its external woodwork resembles branched trees.  The nature theme continues throughout the former guest cottage’s internal furnishing and wallpaper.

Situated on an elevated site with access by stone steps, the Swiss Cottage interior contains a graceful spiral staircase and some elegantly decorated rooms.  The wallpaper in the salon, manufactured by the Dufour factory, is one of the first commercially produced Parisian wallpapers.

Farney Castle is the only round tower in Ireland occupied as a family home. The first castle was built at Farney in 1185 and this would have been a timber structure. The present round tower was built in 1495 by Thomas Butler, 7th Earl of Ormond and it was part of a defensive system created by the Butlers to protect their land in Tipperary.

The Butlers were in Farney Castle for 500 years, but in 1536 the castle was confiscated by King Henry VIII of England. He returned the lands again to the Butlers in 1538 when he married Anne Boleyn who was the daughter of James, 3rd Earl of Ormond.

Currently, the castle is home to the Irish international designer, Cyril Cullen. His famous handmade knitwear designs and fine porcelains are produced, and sold in the castle shop.

Located in the heart of the Golden Vale, Fethard Horse Country Experience offers visitors the opportunity to discover the rich culture, heritage and history of the region. Part of Ireland’s Ancient East, this state-of-the-art interactive experience examines the relationship between the people, the land and the horse revealing how they are all inextricably linked.

Spread out over two floors the interactive nature of the exhibition makes it an enjoyable and informative experience for all ages. The entire building is also wheelchair accessible.

Fethard is home to the world famous Coolmore Stud, Mouse Morris Racing and many more stables.  You will see a beautiful town set against a backdrop of horse – filled fields with the mountain of Slievenamon keeping watch in the distance.

The Butler family has left an indelible mark on the landscape of Ireland.  They constructed castles and mansions, founded monasteries and established many towns and settlements.  Ireland’s only surviving unfortified Tudor Manor House was built by the Butlers, who first settled in this area in the 13th century.

Free guided tours highlight the superb decorative plasterwork and reveal stories about the castle’s most colourful occupant – ‘Black Tom’ who is refuted to have had a close relationship with Elizabeth I. 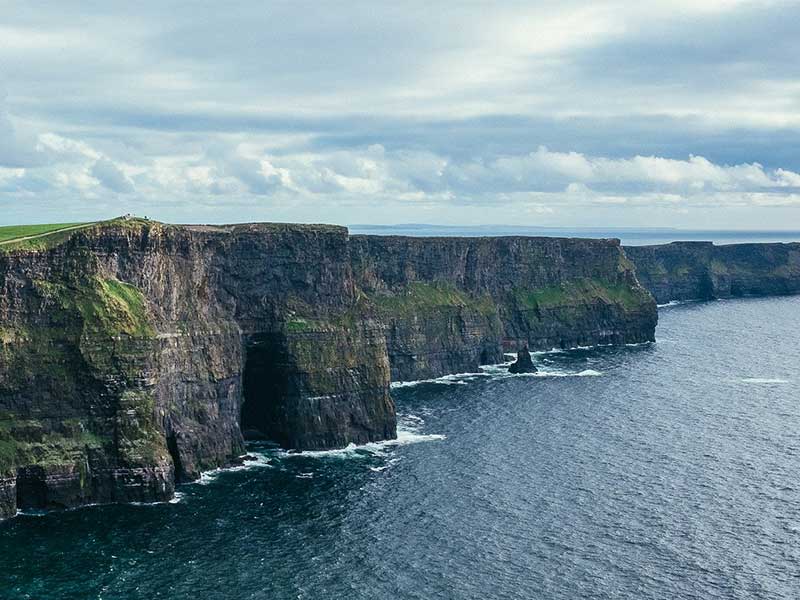 Cliffs of Moher – Amazing Places to Visit in Ireland 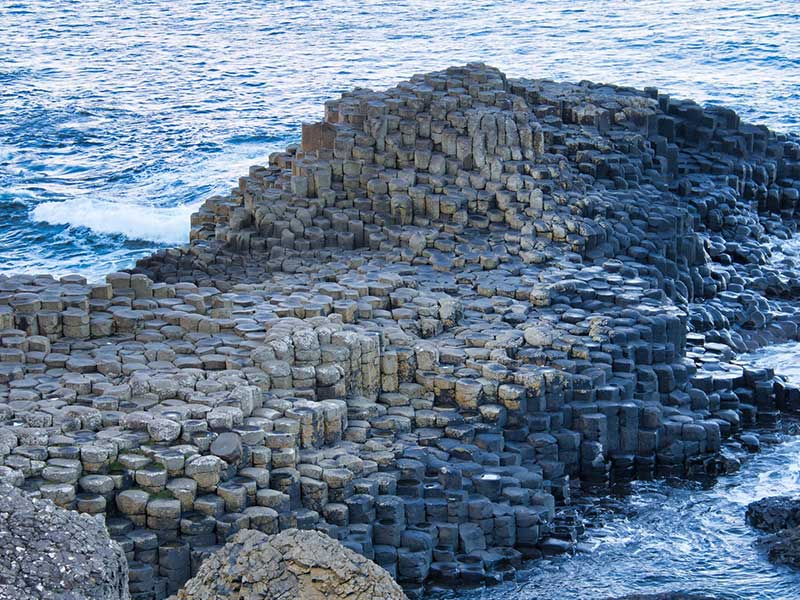 Top Places to Visit in Ireland
BACK TO BLOG
Cookies Information

We use cookies to ensure that we give you the best experience on our website. If you continue to use this site we will assume that you are happy with it.
By clicking “Accept”, you consent to the use of ALL the cookies.

But opting out of some of these cookies may have an effect on your browsing experience.
Necessary Always Enabled

Any cookies that may not be particularly necessary for the website to function and is used specifically to collect user personal data via analytics, ads, other embedded contents are termed as non-necessary cookies. It is mandatory to procure user consent prior to running these cookies on your website.

Analytical cookies are used to understand how visitors interact with the website. These cookies help provide information on metrics the number of visitors, bounce rate, traffic source, etc.

Performance cookies are used to understand and analyze the key performance indexes of the website which helps in delivering a better user experience for the visitors.